Congratulate me. In the minds of some people, my life officially began about twenty hours ago. I watched a Doctor Who episode.

(*curtsies at enormous applause*) Thank you, thank you! Now let me tell you what I thought of it.

First of all, a quick run-down of Doctor Who. This British television series is the longest-running science fiction show, the first episode airing the day President John F. Kennedy was assassinated in 1963 (they ended up replaying it the week after because they were worried the ratings had been affected by the day’s more momentous…umm…event.)

It’s the story of a 900-year-old Time Lord from the planet Gallifrey who travels through time and space, meeting historical personages and/or fighting evil aliens, depending on the episode. He has various companions who join him on all these adventures. The Doctor (who is known only by that title, “The Doctor”) has been played by eleven different actors throughout the years. This is cleverly woven into the plot: Time Lords, when they’re wounded, are able to “regenerate” into a different body. So when, say, Christopher Eccleston decides he’s played the Doctor long enough, the writers find a new actor, make a tragic scene wherein the Doctor gets hurt and has to regenerate, and voila, the awesome David Tennant!

(I couldn’t resist posting this video–I CANNOT get enough of this scene.)

Only he’s not played by David Tennant anymore, he’s now played by Matt Smith. And at our local library, all TJ could find were really really old episodes from the 60’s and last year’s Christmas special starring Matt Smith–the latter of which we finished watching last night.

The 2011 Christmas special was called The Doctor, the Widow, and the Wardrobe and I thoroughly enjoyed it. If you haven’t read the Narnia books, I’m not sure how much you’d get out of it. As you might guess from the title, this episode was a clear tribute to the book The Lion, the Witch, and the Wardrobe by C.S. Lewis. It was set in World War II–it was about a family who has to evacuate from London during the Blitzkrieg. They find themselves in a wintry fairyland and the Doctor even uses the famed line, “What do they teach in schools these days?!” 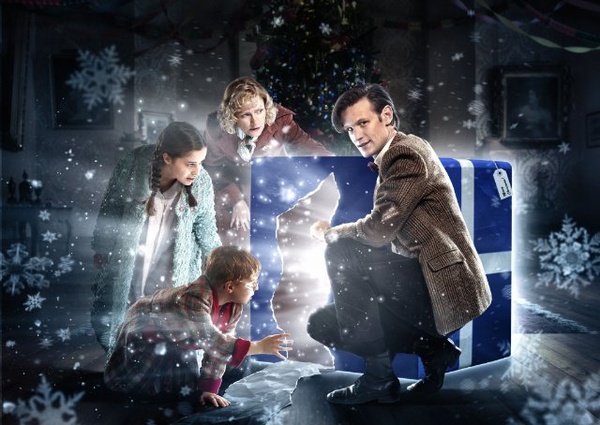 The Doctor, Mrs. Arwell, and her two children Lily and Cyril have to save the endangered Treeple (a clever mix of Tolkien’s Ents and Lewis’ dryads) from acid rain that’s going to destroy their forest. In the process Mrs. Arwell has to face the dread of informing her children that their father was (supposedly) killed flying across the English Channel. The lovable, madcap Doctor has to guide them through the dangers and then back through the time vortex to England, just in time for Christmas.

All in all, it was a sweet episode. Clean (except for one use of the word “hell”) and funny. The Doctor showed genuine affection and care for these needy children–Mrs. Arwell was fantastic as a woman prepared to die defending her family–Mr. Arwell was a dutiful soldier and loving father.  My dad got all choked up during two of the last scenes (out-of-this-world evidence of the heartfelt nature of both scenes!) and we Narnia fans felt like we were in on all the inside jokes.

HOWEVER, we then watched a documentary called “The Best of the Doctor” on the special features. We got a better idea of the TV show as a whole from this 45 minute feature than we did from the actual Christmas special.

Let me make it very clear that this documentary dealt only with the past two seasons (the ones featuring Matt Smith), NOT the past 40-50 years of Doctor Who. So the issues that I’m about to talk about here might not apply to the previous seasons–I don’t really know, so maybe my readers can clue me in.

Firstly, the universe of Doctor Who is a little chaotic. No, not just a little. It’s VERY chaotic. At least in these newer series, there’s a lot of “time manipulation” going on. People going back and forth altering events in one era to affect the events in another era–what appears to be one character being face-to-face with herself as a child–and even the Doctor’s “future version” from 200 years into the future being killed on a beach, in the present time. Sounds complicated, no?

As a Christian I believe that time is linear, heading towards one triumphant goal. The Bible teaches that God is sovereign over history, and that He has foreordained everything that happens. No one can “alter” history. To do so would be to take on the role of God.

Secondly, it appears to me (correct me if I’m wrong!) that the Doctor is autonomous, a law unto himself. Who does he answer to? Well…no one, it seems. And what is it that makes him “the good guy?” Apparently there’s one episode where the bad guys (who have ALWAYS been bad guys, like the Daleks) join together to defeat the Doctor, and the viewer discovers that they (the bad guys) see the Doctor as the bad guy, and consider him a hypocrite because he’s killed their people and now wants to stop them from killing humans. So the viewer is left wondering if maybe the bad guys are really the good guys. Maybe the Doctor is the villain?

Because there’s really no clearly-defined basis of right or wrong (to my knowledge) in the Doctor’s universe, that question is never answered.

Thirdly, there’s the question of what constitutes true reality. In this documentary they talked about an episode in which these aliens (called “The Silence”) are only perceived while being viewed; they are instantly forgotten once a viewer looks away. In the course of the episode, Earth’s populace is conditioned to kill all Silents during the Apollo 11 landing on the moon, though they afterwards forget doing so.

Well, that brings up the question: is reality what we think it is, or is it all a dream? When you wake up in the morning and you look back on the memories of the previous day, what’s not to say that those memories weren’t just something you dreamed in the middle of the night? Maybe today is all there is; yesterday was only a dream. Maybe you killed someone and forgot about it. Maybe your grandmother killed a Silent while she was watching Neil Armstrong land on the moon!

Now I can look at this (and I’m sure most of my Whovian friends are the same way) and recognize it as fiction and…well…weirdness. The scary thing was that the people who were being interviewed on this documentary–adults!–took it way too seriously. They were literally asking those same rhetorical questions I just wrote in the previous paragraph. I didn’t make them up! Postmodern views of reality are often unconsciously embraced by people who don’t have a Biblical foundation for morality, reality, and Providence. My concern is that we’ve got that going on here with Doctor Who, at least in the most recent seasons.

And yet I groan in frustration because it’s so engaging! You have in this series the various battles between one David (no pun intended) against numerous Goliaths, with time travel and some of the wittiest dialogue in the history of Western Civilization. Why oh why oh WHY do they have to stick all that postmodern hullabaloo in it?

Well, what if you had a Christian Doctor Who?

Ah. Ever thought about that, my young Christian friends? Why should the pagans have all the awesome television series? What if someone wrote an original plot that, while imaginative enough, didn’t violate God’s principles for morality and reality and still kept the basic plot device of time travel?

Listen, time travel is not inherently bad. See the very popular Christian film Time Changer. (*imitates Matt Smith*) “Time machine falls out of sky, man falls into 21st century America, man eats hot dog.” The difference between Doctor Who and Time Changer was that Dr. Russell couldn’t alter history. At all. He wasn’t even allowed to see the date of his own death because “It’s not for us to know.” He could only be a prophet warning modern America to, ironically enough, turn from her postmodern views of morality.

A Doctor with a Christian worldview could still travel through time (and space, if you’re into the whole alien thing) in his TARDIS, but 1) he couldn’t alter historical events, because all of history is foreordained 2) God must be sovereign over everything, including Gallifrey and the Time Lords and 3) the Doctor himself must be subject to God’s standards for good and evil, following the good, forsaking the evil, and encouraging others to do the same, because that’s the only way he can truly be the archetypal Good Guy.

I’d write it if I could, but I’m gonna let you all in on a little secret. I don’t have the time to put together a Doctor Who-inspired novel because I’m too busy shaking my fist at George Lucas. Y’know that novel I’m always talking about? Well, it’s a Star Wars-inspired space opera with a distinctly Christian worldview. And no, I’m not copycatting! I have an original plot with a few (a very few) basic similarities–and then several radical differences, the biggest of which is that there is no Force. There is only the God of the Bible–with a different identity, of course, but He’s still the same Person. Nor is there any of Obi-Wan Kenobi’s “Well, it’s true–from a certain point of view” rubbish. There is instead a clearly-defined code of right and wrong, and by that code the characters and readers can determine who is good and who is evil.

I tell you all that to say, “Reclaiming engaging stories and genres can be done,” and I know it can be done because I’ve been doing it, and it must be done by others! We young Christians need to get to work reclaiming the culture for Christ, and that culture includes not just politics and business, but film and books of every lawful genre. I believe that science fiction, when handled correctly, is a lawful genre. Somebody needs to get on out there and snatch the Doctor (or whatever character you make up) from the jaws of postmodernism and stick him right where I think he’d be far happier: in an orderly universe ruled over by a Providential Being who’s leading history towards a resounding Kingdom-victory.

I’ve given my generation this challenge. Now somebody get to writing or filming, and while you’re at it give a hearty shout of “ALLONS-Y!” 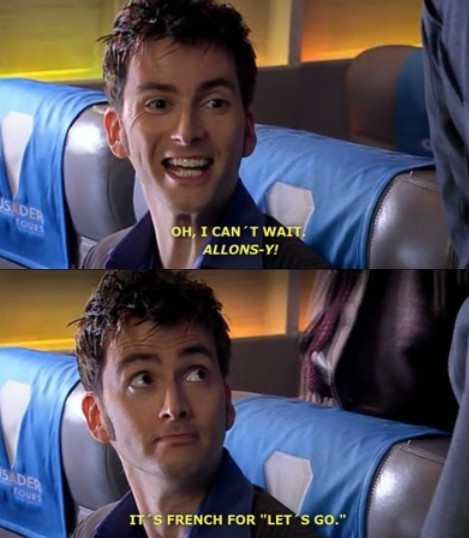 6 thoughts on “Doctor Who Movie Review (or should it be TV review??)”