All right, folks. I have seen it, and there’s only one word for it: AMAZING.

I’m giving it 4 1/2 out of 5 stars. If it weren’t for two very objectionable scenes, I’d give it a full 5. I’ll go ahead and get those two scenes out of the way in my review, so I can launch into exuberant praise without harm to my conscience 😉

This is not a movie for young children. I don’t care if you don’t like spoilers: I’m going to tell ALL so that everyone who sees it will be forewarned and forearmed. I felt like I wasn’t forewarned enough; everyone said “Oh, it’s alright, it’s short and not too bad.”

Well, okay–“not bad” in terms of “not as bad as most of the stuff Hollywood throws out to the masses.” But still bad.

The first scene you need to watch out for is the song “Lovely Ladies,” in which Fantine becomes a prostitute. Her first “transaction” is very brief, but suggestive/graphic enough to disturb my mother. I averted my eyes, but Mom said that while it was quick, it was violent. My recommendation: Keep your head and eyes down until you hear Fantine start with the line, “There was a time when men were kind…”

The second scene is the song “Master of the House,” in which the extremely repulsive Monsieur and Madame Thenardier are showing off their seedy, disreputable inn. This is a trashy scene with all kinds of corruption, decadence, and all-around “yuckiness.” My recommendation: Keep your head and eyes down until Little Cosette shows up again in the woods.

Hopefully those warnings will prove helpful to those who decide to see it in the theater. Personally, I’m looking forward to getting the DVD and editing it. These scenes can be easily removed; they were unnecessary and we’re still irritated with Tom Hooper for even putting them in there.

(*relieved sigh*) Good, I’ve got that behind me. Now I can elaborate on the remaining 95% of the movie. It was everything I’d hoped and more, mainly because I didn’t expect the singing to be as good as it was.

You have to understand: the majority of the actors in this film are not–I repeat, ARE NOT–professional singers. I mean, come on: Russell Crowe as Inspector Javert?! Even I was a little skeptical that Crowe could pull off Javert’s signature song, “Stars.” Not only did he pull it off, but every other actor/actress performed his or her solos to perfection. I still can’t believe it was all live singing and not done in a studio.

Les Miserables is the story of an ex-convict whose life of hatred and despair is transformed by God’s grace, thanks to a simple act of mercy. In the first ten minutes of the film we see Valjean come to grips with his own sinfulness and repenting of it; the rest of the story depicts his struggle to start a new life while still bearing the responsibility of his past sins.

Hugh Jackman is, without a doubt, my favorite film Valjean. I’ve seen three now: the first was Richard Jordan in a 1978 version (I will always enjoy that film), while the second was Liam Neeson in the 1998 version (I hated that one). Jackman’s Valjean had all of Jordan’s gentleness and compassion–but he also had Neeson’s book-accurate physique: very tall and exceptionally strong. Therefore, Jackman was the Valjean of the book.

He did a fantastic job of portraying Valjean’s different phases of life: first as a bitter convict, then as a well-respected and kindly mayor, a gentle father, and the determined guardian of a young man who, if he lives, will likely take away Valjean’s “baby girl.” Valjean seemed like such a good daddy . . . he loved Cosette so much, and he was willing to do whatever it took to see that she was happy and safe, even if it meant he had to sacrifice his own happiness. 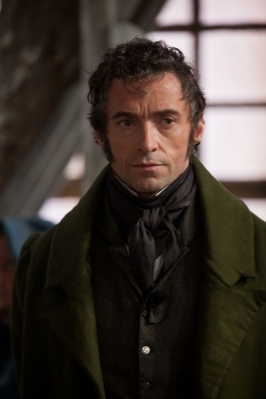 Oh, and he sang won-der-ful-ly. When he sang, “Who am I? 2-4-6-0-1!” and belted that last “1”–oh my, shivers up your spine! He reminded me a lot of Colm Wilkinson, the original Valjean of the musical. I did think his “Bring Him Home” sounded a little strained–but then, no male should be able to hit those high notes anyway, so I give him much grace 😀

Mr. Crowe, I came to the theater a skeptic; I left a believer in your acting abilities and completely amazed by your singing.

Russell Crowe is no Philip Quast, granted. If you came expecting an operatic performance, you’ll be solely disappointed. However, Russell Crowe actually has a voice that not only proved decent, but sounded perfect for the kind of character he was portraying: harsh, relentless, stern.

This Javert was also very complex. He had a genuine motivation to follow the letter of the law (as he saw it)–but when it came down to it, his grace-less worldview wouldn’t even allow him to have any mercy on himself, or allow him to accept God’s mercy. I felt sorry for him. Where Valjean had accepted God’s grace, Javert refuses it, preferring to condemn himself rather than believe that maybe, just maybe, he’s been wrong all his life.

If Anne Hathaway doesn’t get Best Supporting Actress for this role, then I declare the world unjust and unfit to live in! Haha, just kidding 😉 But in all seriousness, Anne’s acting may have been some of the best I’ve ever seen.

Fantine was thrown out of Valjean’s factory (without his knowledge) after her fellow workers and the foreman found out she had a child out of wedlock. Unable to find work, she resorted to selling her hair–then her back teeth–then herself–so she could support her little daughter. While Fantine’s actions aren’t condoned, her self-sacrifice for the sake of her beloved child is admirable, even though we may argue as to whether or not she should’ve sinned against God and herself. (Discussion welcome 😉 )

“I Dreamed A Dream,” one of the most famous songs in musical history, is Fantine’s solo. I realized for the first time how glibly we sing it out of context; it’s a beautiful song, no doubt, but it’s also the raw, heartrending cry of a young woman who thinks everyone has abandoned her. Anne Hathaway makes you feel every ounce of the grief, anger, despair, and horror Fantine feels at that moment. I hardly ever cry for movies, but I burst into tears at the lines, “He took my childhood in his stride” and “There are dreams that cannot be and there are storms we cannot weather!”

I’m getting a little emotional here remembering Fantine’s face when she sang those words. Even the memory is powerful.

Like Russell Crowe, I had low expectations for Amanda Seyfried. By the time we got through her first song, “In My Life,” I was pleasantly surprised and impressed. My dad was shocked when I told him Amanda isn’t even a professional singer, because she hit every high note perfectly. And believe me, she has some high notes.

Cosette is Fantine’s daughter. (When she’s little, she’s played by the adorable Isabelle Allen.) Usually she gets a bad rap for being one-dimensional and ditzy; this Cosette, however, had much more depth. She was an intelligent, caring girl, not at all a lovesick airhead. She had obviously pondered the secret of Valjean’s past and still remembered her life before he rescued her, and she was eager to move out of the past’s shadow and into a new, happier phase.

I didn’t get the impression, though, that she was rebellious about it. She had honest questions and she didn’t always understand Valjean’s enigmatic ways, but she still loved and respected him.

Cosette doesn’t get a lot of time or development in the musical, so I think this positive effect had to do with the way Amanda portrayed her. I couldn’t help thinking, “Small wonder Marius is head-over-heels-in-love with her–she’s precious!”

“I love him, but only on my own!” is how I often feel whenever I express my admiration for Marius. He’s another character who seems to get a bad rap from everyone but me. I love him in the book! Second only to Valjean, he’s my favorite, the most sympathetic and enjoyable character–conflicted, yet honorable, kind, and intelligent. I love the way he’s so protective of Cosette, even in the long months before they ever speak to each other.

I like him in the musical, too–or at least, I like Michael Ball’s portrayal of him.  It doesn’t help my case, though, that they often choose the WORST people in the world to play the BEST romantic lead. Nick Jonas, for instance. And then in the 1998 film . . . that guy looked like a creep. Seriously. He needed to make the acquaintance of a bar of soap and a book of manners.

But now, Eddie Redmayne–he was “Canon Marius,” at least in personality. They made him more of a diehard revolutionary than he is in the book, but he was certainly the right mix of conviction, intelligence, heroism, kindness, and loyalty. And Eddie’s voice (in my opinion) is awesome. Not as good as Michael Ball (nobody’s as good as Michael Ball), but he’s definitely my second favorite. He belted for “One Day More” and “Empty Chairs and Empty Tables.” And I’ll admit, I thought he was very romantic, but in a sweet, innocent way. Very book-accurate. Eddie Redmayne scored big-time with Yours Truly.

And yet Marius is still flawed, and that was portrayed well, too. Eponine is in love with Marius, and yet he is so involved with the revolutionaries or so besotted with Cosette, he’s completely clueless about Eponine’s affection. Anybody would’ve seen the poor girl’s true feelings–except him. Makes you wanna pop him on the head sometimes. At least she dies happy . . .

Eponine is Marius’ neighbor and, once upon a time, Cosette’s childhood companion. She’s a dejected, ragged girl who sees her kindhearted neighbor as her only friend. Marius, who obviously reciprocates her friendship, asks her to find out where Cosette lives, and Eponine, willing to do everything and anything for him, obliges. Marius is beside himself with joy; he praises Eponine effusively while singing Cosette’s praises . . . perfectly oblivious that Eponine has loved him for months, at least, from a distance.

“Ponine,” as Marius calls her, is played by Samantha Barks, who is rightfully famous for her onstage portrayal of Eponine. Samantha has a powerful voice and she plays the tragic but spirited role with gusto–but I felt like all of Eponine’s scenes were far too rushed. Even her death sped by. I think they developed Cosette’s character at the expense of Eponine’s. I wish they could’ve developed both, but I guess I can’t have my cake and eat it, too.

But I did enjoy seeing Marius and Eponine exchange a little banter; I was also glad to see Eponine stand up to her father Monsieur Thenardier and save Cosette and Valjean from calamity. Her solo, “On My Own,” was flawless, and while it wasn’t quite as tragic as “I Dreamed A Dream,” it was still heart-wringing.

Final word on the movie? Fantastic. It needs to be edited, but once that takes place, it will definitely be in my personal list of Top Favorites. I have my own little nitpicks as a musical/book fan, but they aren’t major problems. Kudos to Tom Hooper for another masterpiece on the heels of John Adams and The King’s Speech–and kudos to all the actors for doing an incredible job! Tomorrow, Lord willing, I’ll buy the soundtrack, and I expect I’ll listen to it only about twelve dozen times 😉

P.S. My next post, Lord willing, shall be a review of The Hobbit, which I saw an hour after leaving Les Miserables. Stay tuned!