If you want the short version, here it is: Star Trek Beyond is the finest installment of the franchise reboot, and I absolutely loved it.

Of course, short versions are always a little simplistic, so allow me to wax eloquent for a few more paragraphs 😉 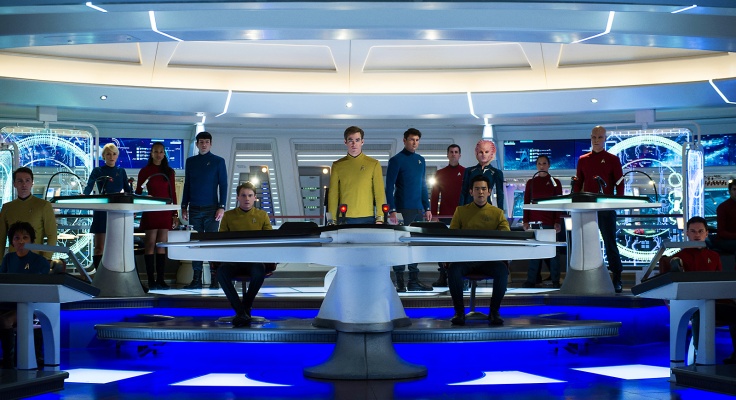 Over the past year I’ve become a walking, talking Star Trek: The Original Series encyclopedia. I’ve watched most of the episodes more than twice, I read LOTS of Star Trek novels, I browse Memory Alpha, I enjoy reading about the show’s production and its cast, and the characters are some of my best fictional friends.

Hence the reason why I never loved J.J. Abrams’ movies the way I loved the old show or its follow-up films like The Wrath of Khan or The Undiscovered Country. They were fun and I do enjoy them, and I really respect Abrams as a storyteller–but they didn’t feel like Star Trek.

Star Trek Beyond is totally different. My mom remarked that “it’s a film for the old fans.” If you don’t know much about Star Trek, I can see why this one might be bewildering. It can be campy at times (just like the old show). The science is iffy at best (just like the old show). References to “giant green hands in space” and lines like “Did you know Scotch was inwented by a leetle old lady in Leningrand?” or “I ripped my shirt again” will seem really random…if you don’t know the old show. It’s crazy, it’s fun, it’s character-driven, just like…well, you get my drift.

It finally feels like the old show, just on a grander, cinematic scale.

We can thank Simon Pegg, his co-writer, Doug Jung, and new director Justin Lin, for this welcome shift from “boldly going into dark gritty angsty drama” to “boldly going into starry-eyed exploration and adventure.” They know the Original Series like the backs of their hands: they grew up watching and loving it (unlike Abrams, who admits that he always preferred Star Wars) and would reward themselves after a hard day of screenwriting with an original episode. Simon Pegg even credits Memory Alpha’s resources for helping him with the script.

The plot is simple, but compelling. The Enterprise walks (or rather, flies) into a well-laid trap and gets destroyed in a nerve-wracking, gut-wrenching scene. The crew is split up; most of them (including Sulu and Uhura) are captured by a mysterious villain, Krall, who literally drains the life out of his prisoners in order to regenerate himself. Others are stranded in the middle of nowhere on the other side of Krall’s planet: Kirk and Chekov land together in a forested area, Bones tries to keep a wounded Spock alive in an unhospitable cave, and Scotty makes friends with the fearsome yet adorable Jaylah, who makes her home in an old, downed Starfleet vessel, the Franklin.

The stranded pairs, of course, have to find each other in time to rescue the captured crew and Starbase Yorktown. Throw in emotional subplots like the death of Ambassador Spock (AKA Leonard Nimoy), Jim struggling with whether or not he ought to accept a promotion to the admiralty, Jaylah’s loneliness and determination to avenge her dead father, and Spock and Uhura’s struggling romance…and you’ve just got a lot of feelings to deal with here.

Jim Kirk IS Jim Kirk in this movie. Gone is the devil-may-care jerk of the first two films: this guy walks, talks, and acts like the old Captain Kirk we all know and love. Spock is more physically vulnerable in this movie than he has been since The Search for Spock, and more emotionally compromised than he has been since the original episode “The Naked Time.” With anyone else, it would feel out of character; with Spock, it’s like you’re discovering yet another layer of complexity. Dr. McCoy, meanwhile, steals the show with both his dry, no-nonsense humor and his surprisingly kind counsel to both Jim and to a Certain Vulcan he only pretends he can’t stand. “I’d throw a party if you left,” my foot. If Spock left the Enterprise, Bones wouldn’t know what to do with himself.

Lieutenant Uhura is Queen of Trek, as always; her steely-eyed defiance of Krall is nothing short of awesome. Plus, she’s head-over-heels in love with a Certain Vulcan and he’s head-over-heels for her, and it’s ADORBS. I ship it so hard now. There was a lot of controversy over Sulu’s character this time, since he’s revealed in this universe as being (*ahem*) not straight. But for those of us who are uncomfortable with this change, we can be thankful it was revealed in an extremely discreet, 30-second scene.

Chekov spends most of his time with Jim and had several good moments, including a full scene where he and the captain sneak into the wreckage of the Enterprise. Scotty spends most of his hilarious screen time rebuilding the Franklin with Jaylah, the somewhat naive, very fierce, but good-hearted alien girl who ultimately helps the crew save the day. It’s Scotty who soothes Jaylah’s fears with the same truth that Uhura uses to challenge Krall: there’s strength in unity, and “as my wee Granny used to say, ‘ye cannae break a stick in a bundle.”

Yes, there were some plot holes, mostly involving Krall’s background and abilities/powers. We still don’t know exactly where Jaylah gets her uh-may-zing technology, either. And yes yes, I know, blasting the Beastie Boys at incredibly high frequencies won’t ever really defeat your enemies and rescue a starbase from complete annihilation (kids, please don’t try this at home). But hey, we live in a world that thrives on stories about scrawny American kids becoming superheroes by being dosed with VitaRays. I think we can handle “the beat and the shouting!” 😉

One more thing before I close. Star Trek Beyond was released a year and a half after Leonard Nimoy’s death, and about a month and a half after Anton Yelchin’s. Beyond has several poignant tributes to Nimoy, the most obvious of which is the death of Original Spock and Reboot Spock’s conversation with Bones about him; a more subtle one would be the Franklin‘s serial number, NCC-326 (Leonard Nimoy’s birthday was March 26th). The time frame didn’t allow for many tributes to Anton Yelchin, but director Justin Lin did purposefully add a shot with Chekov when Kirk makes a toast to absent friends, and there’s a dual dedication to both Nimoy and Yelchin mid-credits.